Wright claimed his third CT victory today by defeating close friend and teammate Matt Wilkinson (AUS) in what was one of the most inspiring comebacks in surfing history. Wright sat out the entire 2016 season due to a career-threatening, traumatic brain injury he suffered on Oahu’s North Shore in Hawaii in 2015 and the Quiksilver Pro marked his triumphant return to the Championship Tour after accepting the injury wildcard for 2017. The win today is his best ever result on the Gold Coast and earns Wright the top spot on the Jeep Leaderboard.

“At the start of February, I was sitting in the doctor’s office and there were question marks on the year,” Wright said. “So to be sitting here right now, we just pushed hard and went hard. I confronted every fear of getting back into it. There were a lot of fears I needed to push through in order to get back into the sport and back into what pretty much took me out and could have taken me out forever. I kept going and kept doing it. I am just so stoked.

“I couldn’t have done it without all the support of my friends and family, including my partner and my little baby boy,” continued Wright. “We just kept going and the team just kept saying, ‘Keep breaking it down,’ and ‘Keep going Owen, keeping getting back there.’ This is what I love. This is what I love doing.” 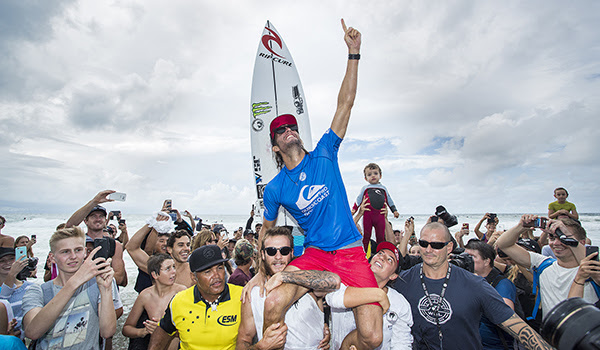 The Quiksilver Pro final saw Wright take on Wilkinson in a thrilling battle of the goofy-footers. Both surfers went wave for wave, but it was Wright who claimed the win with an excellent 8.33 and 6.33 by showcasing his powerful backhand snaps. Wilkinson, with two 6-point rides, was not able to deliver the required scores to defend his event title.

“To be in another Final here is a dream,” said Wilkinson. “I obviously wanted to win but Owen [Wright] has made me cry about five times this week. To see him last year was one of the toughest things I’ve ever seen and for Owen to be in the this event is one of the most amazing things, but to go and win is incredible. I couldn’t have asked for a better person to beat me. He’s inspired me so much and to come back and do this is unreal.

“Coming into the event this year I did have a sneaky bit of confidence but you do think about all the work that the others have put in on the off season,” continued Wilkinson. “Now I guess I feel a lot more confident and I feel like my surfing is the best it’s ever been so I’m really excited to go for the World Title.” 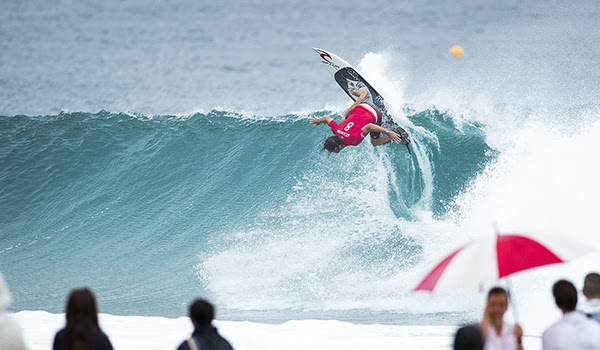 2016 WSL Champion Florence was eliminated by eventual runner-up Wilkinson by a narrow margin of 0.40 in the Semifinals. Florence’s 3rd place finish is his best result on the Gold Coast and most successful start to the Championship Tour season. Florence will go into the next event ranked 3rd on the Jeep Leaderboard with the goal of reclaiming the Jeep Leader Jersey from Wright.

“In heats like that, there is isn’t too much that I could’ve done differently,” Florence said. “It is funny because almost the identical thing happened to me last year against Stuart Kennedy, but I am stoked. Third place is the best I’ve done here at Snapper. We’ve got such a long year ahead. Anything can happen and I’m excited. I’m happy. I am going to head over to Margaret River early and try to get barreled before everyone gets there.”

The six-time WSL Champion Stephanie Gilmore (AUS) claimed her sixth Roxy Pro title today after defeating Lakey Peterson (USA) in the Final. Today’s win marks Gilmore’s 25th elite tour victory and her first since the Cascais Women’s Pro in 2014. The result will move Gilmore up from 6th to 1st on the Jeep Rankings.

“I can’t believe it, I’ve been visualizing holding that trophy so much,” Gilmore said. “It was so hard against Lakey [Peterson]. I’m so happy to have all the support from everyone here and there’s nothing better than winning at home.”

Gilmore previously dispatched three-time WSL Champion Carissa Moore (HAW) in the Quarterfinals with a perfect 10-point ride and compatriot Sally Fitzgibbons (AUS) in the Semifinals. Moore, who came into the event ranked third in the world, will move to fifth. Fitzgibbons’ Semifinal berth will see her climb up five places to third on the Jeep Leaderboard.

“I haven’t had the yellow jersey for a while and it’s going to feel so good to put that on,” continued Gilmore. “Getting to win an event again was really cool and it feels really rewarding to win. It’s so far from here but I’d love to win another World Title. It’s the greatest feeling in the world to win here, in the greatest place on earth in my eyes.” 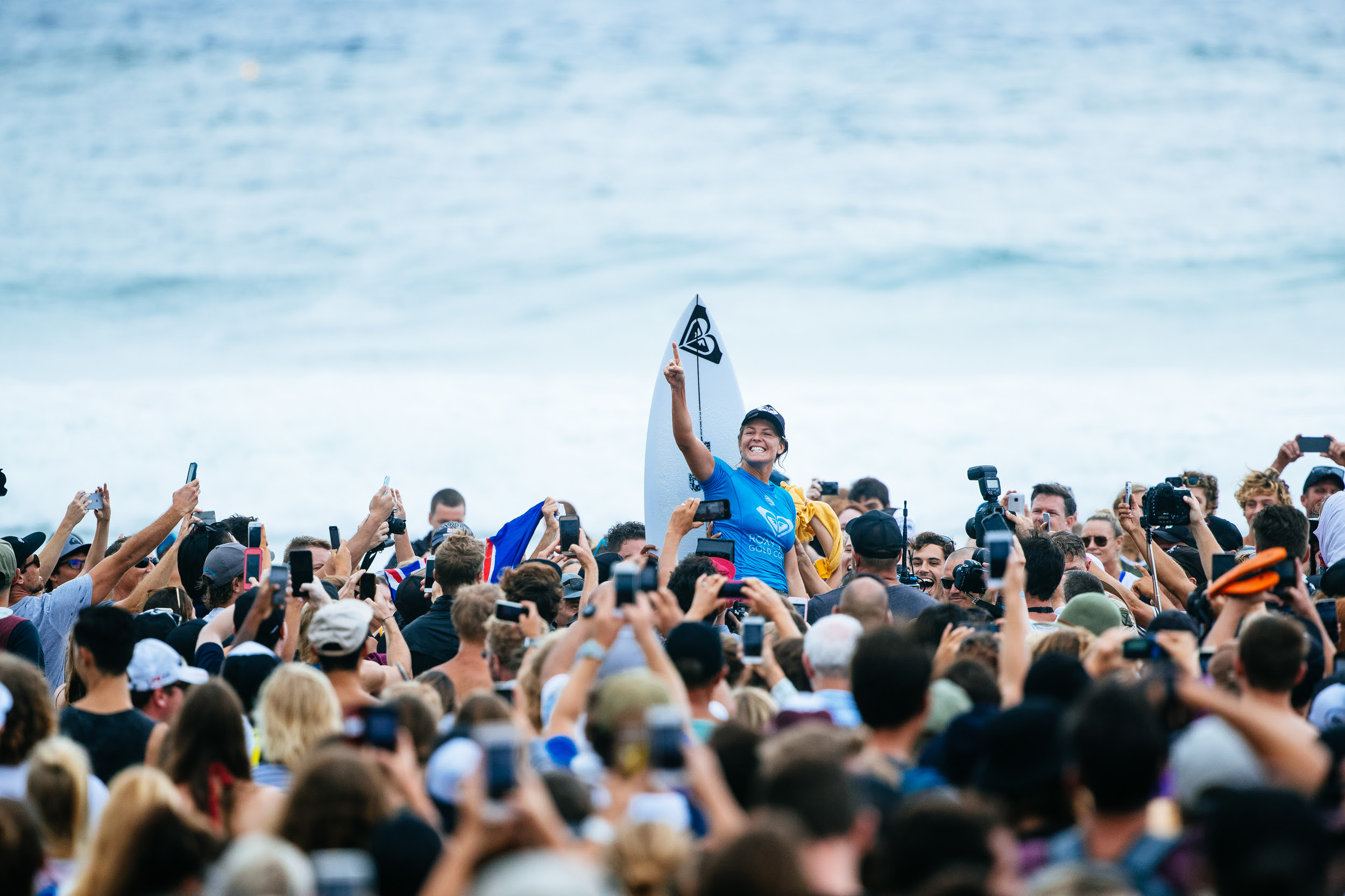 The Roxy Pro Final saw Gilmore and Peterson do battle for the win. Peterson got to work early, posting two mid-range scores, but local favorite Gilmore kicked things off with a commanding 7.93 on her opening ride. Gilmore continued to pull out all the stops with big fin-throws and sharp turns to earn an excellent 8.67, putting more pressure on the Californian, who was not able to answer back. This Final marks the pair’s fourth head-to-head match-up, with Gilmore taking the win each time.

Peterson has been on a tear throughout the competition, posting consistently high scores including a perfect 10 in Round 2 and the two highest heat totals of the Roxy Pro. Peterson previously defeated Johanne Defay (FRA) in the Semifinals and reigning WSL Champion and defending event winner Tyler Wright (AUS) in the Quarterfinals en route to the Final.

With one event win so far during her six year career on the Championship Tour, at the US Open of Surfing in 2012, today is her best result at Snapper Rocks, having previously made the Semifinals in 2014 where she was defeated by Bianca Buitendag (ZAF). Today’s result sees her move up from 13th to 2nd place on the Jeep Leaderboard.

“I can’t complain too much with the result,” Peterson said. “I just missed it by one spot so it keeps the fire lit in me. It stings a little, but I really think I put together a great contest and did my absolute best. It was a really fun time and I’m so stoked the waves worked out as well, we got pumping surf for this event. To compete against Stephanie [Gilmore] here gives me chills and is one to remember.

“Margaret River is a big shift, but I’m excited this year,” Peterson continued. “I feel pretty comfortable in the bigger stuff now so I hope we get some waves. Everyone is surfing so well this year so it’s really fun to be part of it. I want to win the World Title for sure. After sitting on the sidelines and watching Tyler [Wright] dominate last year, I wanted to tap into that and come out guns blazing.” 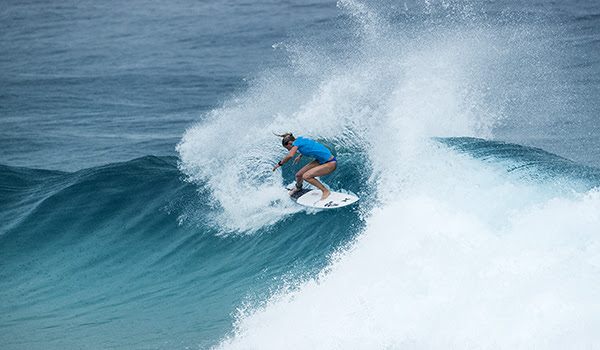 Reigning WSL Champion and defending event winner Tyler Wright (AUS) was eliminated by Peterson in the Quarterfinals. Wright, with a 9.93 two-wave combined score,  could not find the waves to escape Peterson’s near-perfect 9.27 and 7.83. Wright’s 5th place result will move her from first to 5th on the Jeep Leaderboard heading into the Drug Aware Margaret River Pro.

“We really missed Lakey [Peterson] on tour last year so it’s amazing to have her back,” Wright said. “She came out hard and put me on the back foot and I never really got back on the front. This is a new year so I’m not going to focus too much on last year. It was tough but all and all I’m pretty happy with how I surfed.”

In their eighth head-to-head match-up, Medina earned his sixth win over 11-time WSL Champion Kelly Slater (USA) in the all-star Quarterfinal heat. The battle for the win came down to the dying seconds where both put all on the line in their last ride. Medina came away with the win after being awarded a near-perfect 9.17 to Slater’s 7.50. The four-time event winner will be eliminated with a 5th place result to kickstart his hunt for a 12th World Title.

2017 CT Rookie Connor O’Leary (AUS) put up a solid fight against Owen Wright in the Quarters. With a slow start to the heat, the critical exchanges came down to the final minute where Wright got the edge to take the win. As the only rookie to make it this far in the men’s event, O’Leary’s Rookie of the Year campaign is looking strong. He will head into the next event moving up to 5th on the Jeep Leaderboard.

En route to the Semifinals, Florence knocked out Brazilian challenger Italo Ferreira (BRA) in the Quarterfinals. Ferreira will earn an Equal 5th place finish, his best ever result on the Gold Coast.

Highlights from the Quiksilver and Roxy Pro Gold Coast are available at WorldSurfLeague.com.

The next stop on the 2017 WSL Championship Tour is the Drug Aware Margaret River Pro in Western Australia from March 29 to April 9. The event will be broadcast LIVE via WorldSurfLeague.com, the WSL app and the WSL’s Facebook page as well as Fox Sports in Australia, Sky NZ, SFR Sports in France, Sport TV in Portugal, EDGE Sports in China, Japan, South Korea, Malaysia and other territories and on Globo TV in Brazil.

For more information, check out WorldSurfLeague.com.